It wasn’t working. Rick gamely pushed buttons and I began a serious read of the  instruction manual. Still no success. Behind us I could hear the audience shifting restlessly.

We were at the Port Hardy Museum where Rick was scheduled to present an illustrated talk on his new book, West Coast Wrecks & Other Maritime Tales. The laptop was on and connected to the projector which was also on. The screen was up but the only thing showing on it was Searching for input…

After a few minutes Rick said, “I think we need a young person,” and left the museum. I told the audience we were having technical problems and to bear with us. I returned to page 12 of the manual and wondered how long I’d be stuck at the front of the room on my own.

But in only a few minutes Rick came back with a tall teenage boy. Josh clicked a few keys, wiggled a few cords and within 20 seconds the show was up and running. Turns out we’d plugged one of the cords into the wrong hole.

Okay, I admit Rick and I are of a certain age and didn’t grow up in the digital generation. But hey, the colours on the end of the cord and the hole matched and it fit!

Rick launched into the story of the wreck of the Geo. S. Wright. Then someone visited the ladies washroom and happened to turn on the light at the exact same moment a museum volunteer plugged in the kettle. The museum was plunged into darkness.

After flipping numerous switches in the breaker box power was restored. But the Power Point show wouldn’t come up. I dashed back to Café Guido where Josh’s boss was kind enough to let him disappear again.

As we crossed the street towards the museum I asked the teen if he liked books. “I love them,” he replied.

Back at the museum Josh did his slight-of-hand techie magic and a beautiful rendition of the Geo. S. Wright appeared on the screen. The audience cheered and I handed Josh a copy of West Coast Wrecks.

“Is he the author? Josh asked looking at Rick with a big smile. “Yes,” I said. “And he’ll come over to the café to sign the book when he finishes his presentation.” There was an even bigger smile this time.

I learned three things from this experience.

#1. Always make sure you have the plug hooked up to the right thingiemejob.

#2. Even in this digital age young people still like real books.

#3. And, perhaps most important of all, if you’re ever having technical troubles, find a teenager.

In my “book,” anything that makes reading easier and accessible to more people is a good thing. E-books and e-readers are bringing a whole new dimension to the reading experience and who can argue with that?

An amazing feature is being able to read an e-book in the dark. You can also adjust the size of the text, highlight passages and look up the meaning of words. Best of all, you have access to tons of books instantly and can carry them all on one portable device.

Yep, e-books are definitely made for travelling. The next time I take a trip to a foreign country, I’ll consider carrying my reading material on an e-reader. Just think how much more room I’ll have to pack clothes and shoes if I do away with my usual six pack of pocket books!

But in my heart of hearts I’ll always love paper books. To begin with, I grew up with them, so they’re familiar and comfortable. I love holding a book in my hands and turning the page to find out what happens next.

Besides, paper books are incredibly versatile. As decorating accessories they add colour and intellectual cachet to your shelves. They can also serve as door props, as well as do double-duty as storage areas for postcards from exotic lands and interesting leaves found on walks.

If you’re an author you can discretely place books you’ve written around the house for visitors to “discover.” And signed copies make great last minute gifts.

Paper books are forgiving too. They’re usually still readable even after being splashed with red wine or smeared with chocolate. Even a dunk in the bathtub doesn’t have to spell the end.

But most of all, I like reading what other people have written on a book’s flyleaf. A hard cover book I picked up at a garage sale was inscribed: “To Edna, with love on our first Christmas together. From your Jack. December 1932.”

So e-books get my vote when it comes to convenience. But if you’re looking for character, paper books are the way to go. If you have any doubts, check out Lane Smith’s one minute video, It’s A Book.

Okay, everyone knows that sitting for long periods of time isn’t good for you. Your bottom tends to get bigger and back pain often occurs over time. But I never knew sitting could kill me!

Yes, according to an article in the Mayo Clinic newsletter, prolonged sitting can increase a person’s risk of health problems and premature death from cardiovascular disease.

One study revealed that adults who sat in front of the TV for more than four hours a day had an 80 percent increased risk of death from heart disease and stroke than those who watched less than two hours of TV a day.

And it’s not just TV. Any bouts of extended sitting; be they in front of a computer, at a desk or driving a vehicle increases the risk. Another shocker – apparently going to the gym after work doesn’t magically erase those harmful hours of being on your duff.

So what to do?

“The solution,” according to Dr. James Levine, “seems to be less sitting and more moving. Simply by standing, you burn three times as many calories as you do sitting. Muscle contractions, including the ones required for standing, seem to trigger important processes related to the breakdown of fats and sugars. When you sit down, muscle contractions cease and these processes stall.”

Now I have considered altering my work station so I could type sitting down or standing up. In fact, I know an artist who has an adjustable easel for just that purpose.

But then I discovered a cool video on the Mayo Clinic website.

In it, Dr. James Levine, a Mayo Clinic researcher, says that people are built to walk. He’s studying the benefits of treadmill desks, which allow people to walk while they work.

Now this is an intriguing idea. I could work, reduce my risk of cardiovascular disease and maybe shed a few pounds all at the same time. Sounds like a win-win situation to me.

Now I wonder just how much one of those a treadmill desks costs? And if I could actually type while walking?

I looked over with alarm. I’d hired a computer tech to fix what I thought were some minor problems. But this sounded serious. Perhaps even terminal.

“I’ve never seen such a degraded keyboard,” he replied.

He was right. The y, u, I, h, k, n and m letters were totally worn off. They must be used in a lot of words. Not having them didn’t bother me. I rarely look at the keyboard when I type. But friends and family teased me about it whenever they came to visit and used my computer.

One day I remembered I had a bottle of Sheer Heaven in the bathroom cabinet. Working carefully, I used the white nail polish to paint thick, but legible, letters on my keyboard. Everyone thought that was pretty funny. 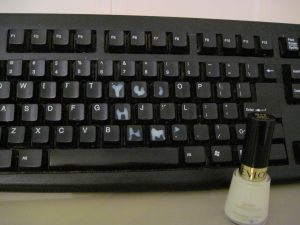 When I got a cheque for Christmas marked “new keyboard,” I knew it was time to move on. But it was hard to let go of the old one. I estimated that during the six years I’d had it, I’d written two books and 400 articles. That adds up to 435,000 words or so. No wonder some letters were worn off.

Like many people who sit in front of a computer all day, I have chronic back problems. So, after some research, I bought an ergonomic keyboard.

It was all flowing curves and – if I only knew how to use them – had enough bells and whistles on it that I could probably fly to the moon.

But you know what? For some reason the ergonomic keyboard made my back pain worse. After three weeks of adjusting my chair and tilting the keyboard this way and that trying to make it work, I returned it.

A new keyboard is still in the works. In fact, I’ve got my eye on a sleek little black number that promises to be easy on the back and ultra quiet. All I have to do is say goodbye to the old keyboard. Again.