Sometimes it seems like the stars have to be perfectly aligned in the heavens for any real writing to be done, never mind starting and finishing a book.

But there are some elements that help. Inspiration is one but it’s unpredictable at the best of times. It’s far better to use what I call the the writing triangle.

The triangle is composed of a place, a time and a plan.

Every writer deserves – and needs – a place to write. Some folks are happy at the kitchen table or super creative at the local cappuccino bar. Personally, I think to be most effective, a person should have a room – no matter how small – that they can call all their own. If need be, it can even be part of a room. What’s important is that this be a place where you will not be disturbed.

Once you have a place, you need a time. And that doesn’t mean whenever you can make time or the creative muse happens to strike. If you are serious about writing you will make time to pursue your craft on a regular basis. 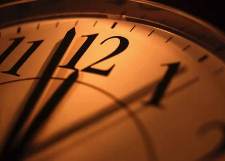 This might be a couple of hours in the morning before you go to work, two hours after the kids go to bed or four hours on Saturdays. The important detail here is to have a regular time and stick to it. Make this your time for writing, whether you feel like it or not. Believe me, if you sit in front of a blank screen long enough, the boredom will make you want to write.

And, contrary to popular opinion or a strong sense of responsibility or guilt, very few things will happen that require your immediate attention. Years ago when my step-daughter was young, I had my writing desk in a corner of the living room. After many interruptions I nicely but firmly asked her not to disturb me unless we needed to evacuate the house or someone needed to go to the hospital. It worked. (But having a private place makes it easier.)

Now for the plan part. If you want to finish a book and not make it your life work, it’s best to give yourself a deadline. Let’s say you’re starting your project on January 1 and want to have a completed first draft by Sept. 1. Divide those 35 weeks by the number of chapters  you estimate your book will have. Now you know how much time you can devote to each chapter. For example 35 weeks divided by 16 chapters means you can spend about two weeks writing each chapter.

Every time I begin a book I make a plan and adjust it as necessary. That means once a month or so I check my plan to see how I’m doing. To date I’ve never finished a draft or book when I initially thought I would, but without a place, time and plan, I know it would have taken me much longer.

The cardboard box sat on the floor beside the kitchen table for four years. I walked around it, passed food over it and occasionally shoved it around with the Dirt Devil.

Inside the box, the guts and soul of a book: a length of household string; a package of matches; a 2003 Telus calendar; a BC Interior road map; the Fall 2002 issue of GUSHER; handwritten pages torn from a Mead notebook; the first typed chapter of Campie. I’d started writing within days of leaving the oilrig camp in January 2003, opening with the declarative: “The job started with a fraud and ended with a lie.” (I loved that sentence.)

Oh, and one more thing was in the box: from the Saturday Post, April 19, 2003, an essay by Don Gillmore titled, “On Saturday Nights, I Dreamt of Saturday Nights.” Gillmore had written about his experience as a roughneck on an oilrig. I tucked it into the box to punish myself for not finishing the book.

When I turned 50, I made a decision to stop feeling bad about my past. This meant retiring an aging inner blues trio called The Ambitions, Hopes and Dreams. “Sorry gals,” I said, “You gotta go. Momma needs a new tune . . . something like ‘Goodbye Alibi.’”

Six years later, I graduated from the University of Victoria with a BA and a book contract with Heritage House Publishers for Campie. The protagonist had become a Barbara persona distanced by a narrative arc in chapters.

I wasn’t me. Campie didn’t become a real book and my private story wasn’t public until I pressed SEND to the publisher. Not many nights later, I woke up in a sweat to a comeback choral performance of that sentimental oldie “Who’s Sorry Now?”

I came to realize that it wasn’t public exposure I feared at all. My motive for 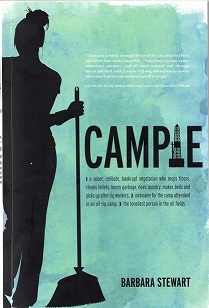 writing Campie was to tell a story about failure and hope. The underbelly served a purpose. Although it took a few deep breaths to own the introduction, “a sober celibate bankrupt vegetarian . . .”

No, it was the reaction of family and friends—those personally impacted by what I had written­—whose love mattered the most. Unconditional acceptance by and for strangers was an easy grace.

When my sister said the book was so wonderful she couldn’t put it down, when my mother said she loved it and we talked about where it made her cry, when my daughter organized my first reading and invited her closest friends, when my son supported me for three months while I wrote and thanked me for all that I’d gone through, that’s when I knew I had projected judgments only within myself.

These Bessie Smith lyrics said it so well:

“Now all the crazy things I had to try, Well I tried them all and then some, But if you’re lucky one day you find out, Where it is you’re really coming from.”

Campie gave that luck to me.

Paula’s note: Barbara Stewart’s Campie, a new release by Heritage House Publishing, is the best book I’ve read in a long time. It’s funny, scary and brave. The writing is fresh and original; there’s no artifice or fancy maneuvering, just a great story told straight from the heart.