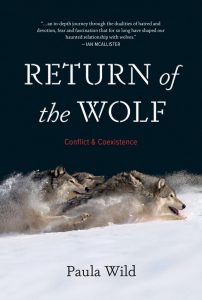 Return of the Wolf won a Silver Medal in Environment/Ecology  at the Independent Publisher Book Awards!

Based in the USA, the annual award honours the best independently published titles from around the world.

Judges include experts in the fields of editing, design, bookselling, reviewing and libraries. Their decisions are based on quality of content, originality, design and production with a special emphasis on innovation, compelling text and social relevance to current times.

A thousand thank yous to everyone at my publisher, Douglas & McIntyre, for 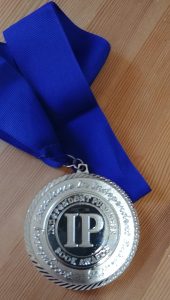 the time, energy and support given to the Wolf. And also to the people who so gen­er­ously con­trib­uted their know­ledge, ex­per­i­ences and pho­to­graphs.

A book, especially an award-winning one, is truly a collaborative effort!

Around 1:00 a.m. on August 9, Matt and Elisa Rispoli jolted awake when they felt the side of their tent move violently. Matt assumed it was a black bear so yelled and struck the tent where the animal was pushing on it. The animal bit Matt’s hand and proceed to tear open the tent. As their shelter collapsed around them, Elisa threw herself over the New Jersey couple’s two young sons.

Through the new opening in the tent, Matt saw a wolf about a metre (three feet) away. Then it lunged at him, grabbing him by his upper right arm. Matt, tried to punch the wolf in the throat but that didn’t deter it. As the wolf tugged the police officer out of the tent, his wife grabbed his leg and tried to pull him back.

The screaming woke up the Fees who were camping nearby. Russ’s wife handed him a lantern and he sprinted toward the noise. The Calgary resident saw what looked like a large dog and using the momentum of his run, kicked it in the hindquarters. The animal let go of Matt but didn’t leave.

With blood running down his arm, Matt crawled out of the ruined tent, brandishing a tent pole. The two men threw rocks from the fire circle and yelled at the wolf until it backed off enough for the Rispole family and Russ and his wife to seek sanctuary in the Fee vehicle. The wolf followed Matt but the two men were able to keep it at bay.

Both families were badly shaken by the ordeal and Matt is recovering from bite marks and puncture wounds to his hand and arm. The next day a park employee found a wolf about a kilometre (half mile) from the attack site. When he got out of his vehicle the wolf approached him and was shot and killed. DNA revealed it was the wolf that had attacked Matt.

Although wolves have attacked people in two Canadian provincial parks and elsewhere in Canada, this is the first documented wolf attack in a Canadian national park. And the incident has wildlife officials somewhat puzzled. There were no significant attractants in or near the tent at the Rampart Creek Campground and no reports of a food-conditioned or habituated wolf in the area, which are the primary cause of negative human/wolf interactions in North America.

Results of a necropsy described the condition of the wolf as old, extremely emaciated (35 kg/78 pounds) and with worn teeth. Unless further evidence of a conditioned/habituated wolf comes to light, the motivation for this predatory attack appears to be starvation.

The Rispoles and Fee did everything right. They made lots of noise, aggressively fought back and got to a safe place. Based on evidence available at the time of this posting, this was an extremely unusual situation that no one could have foreseen.

Two tools that may   have stopped the altercation sooner are bear spray and/or a fixed blade knife. (It’s illegal for anyone other than staff to carry firearms in Banff National Park.)

There have been some complaints about the wolf being shot. But, the reality is, the wolf would have been a danger to any human it encountered. And shooting it meant a quick death, rather than a long, lingering one.

This unfortunate incident is a good reminder to be prepared when in wild areas and that wolves are large, strong predators that can, on occasion, be dangerous to humans.