Writing is primarily a solitary pursuit. Writers need chunks of uninterrupted time to think about their story and get it down.

But it’s all too easy to do too much thinking and not enough writing. To promise yourself you’re going to finish chapter five this month…and then find that all you’ve done is move a few words around on your computer screen.

That’s when having a writing buddy can make a difference. This is someone you can share your dreams and doubts with, as well as your struggles and successes.

One of my best writing buddies isn’t even a writer. Bev Byerley’s a West Coast painter with a passion for landscape. Just like me, she needs time to think and work. And she grapples with the shapes of clouds and trees the way I wrestle with the sound of phrases and paragraphs.

I was surprised to discover that the creative process is similar no matter what the medium. And I enjoy the camaraderie of getting together with another artist.

My other writing buddy is a writer. Caroline Woodward is the author of several books and countless poems. She used to live in the same town as me. We’d meet for lunch every couple of months to yak about our latest projects, the rejections or acceptances we received from publishers and other aspects of the writing life.

Then her husband got a job on a lighthouse and she followed. But

before she left, we vowed to email each other on the first day of every month. These emails include our writing goals for the coming month and a progress report on what we accomplished the previous one.

We’ve been doing this for a couple of years now and are both surprised at how this one email a month helps keep our writing on track. Without planning it, we’ve arranged a system that incorporates several important tips recommended by goal setting experts.

So, if you have a lot of ideas but have trouble accomplishing them, I recommend finding a creative buddy. This should be someone you like, feel comfortable with and admire.

Ideally, each of you will have slightly different areas or levels of expertise so you can learn from each other. But most of all, you should both be prepared to listen and offer constructive feedback. Laughing a lot is good too.

Sometimes it seems like everyone I talk to wants to write a book. I’ve lost count of the number of people who’ve told me they have a great idea; all they need is the time, motivation, a new laptop or some other little thing that will allow them to create the next bestselling novel or the definitive world history.

And, you know, some of the ideas I hear would make good books. So why haven’t they been written? Motivation is a primary reason, I’m sure. It’s hard to get up an hour early or to skip your favourite TV program to work on a manuscript. But some people do it. What gives them the will to park themselves in front of their keyboard and write instead of just talking or dreaming about it?

For most folks there’s a defining moment when they decide to go for it and do their best to become a published author. A couple of years ago Chevy Stevens (the pen name of Rene Unischewski) was working as a real estate agent in Nanaimo. But she wanted to write a book.

“I figured if I was going to do it, now would be the time,” she said in an interview with the Nanaimo Daily News. “It’s a lot harder years later, especially if you’re married and have children.”

So Chevy quit her job, sold her house and lived off her savings for two years. When she’d written the best novel she could, she hired a professional editor to help her make it even better.

Stevens was willing to take some big risks but they resulted in an agent, a contract and a book that made the New York Times Bestseller List and is currently optioned for a movie. 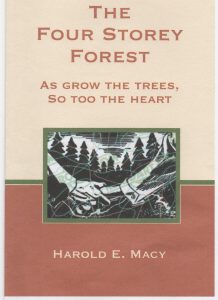 For Comox Valley resident, Harold Macy, it was different. He’s written scores of short stories and won numerous awards for them. But he wanted to write a book.

About six years ago he began a fiction/nonfiction hybrid based on his experiences as a forester. He’d write and rewrite and, on occasion, take his manuscript to workshops to get feedback and hone his craft.

Eventually Harold knew his manuscript was as ready as it would ever be. He also knew he’d be 65 soon and wanted his book published sooner rather than later. So he investigated his options and decided to self-publish. The Four Storey Forest, which includes a dust jacket blurb from award-winning author Jack Hodgins, is scheduled for release this May.

I met Harold 25 years ago at a writing retreat at Strathcona Park Lodge. That was my watershed moment. I’d had a few articles published but, like everyone else, I wanted to write a book.

Getting away from the obligations and distractions of daily life and spending time with like-minded people opened my mind to the possibilities of what I could do – if I was prepared to work at it. And receiving feedback from published author, Bill Valgardson, was invaluable.

What did you do – or what will it take for you – to make your book dream a reality?

I had a hard time making ends meet when I first moved to the Comox Valley. It was 1988, the economy was sluggish, my unemployment insurance benefits had run out and I was dipping into my meager savings. I applied for many jobs but no one was hiring.

As often happens, I found the solution to my problem in a book. To alleviate her financial woes, the heroine in the novel I was reading took in laundry and ironing. A domestic goddess I am not, but after casting around for some skill to market, I decided to take in typing.

My first client was 70-year old Hope Spencer. A writer in her own right, she had yet to conquer the basics of her new computer. So I became her typist in the interim.

But Hope became more than just a client. She knew the owner of Blue Heron Books in Comox and suggested I contact her regarding a part-time job. She also knew a publisher that might be interested in a book I was working on.

And she invited me to some of her parties. It seemed like Hope knew everyone and soon I began making connections in my new home town.

As it happened, both Hope and I belonged to the Periodical Writers Association of Canada. Since I found it difficult to attend PWAC meetings and social events in Victoria, she suggested we hold informal meetings at her place. Hope provided tea, coffee and the use of her huge round table, which she said facilitated discussion.

And she was right – the brown bag lunches were lively and stimulating with writers of every genre talking about what they were working on and asking for and giving advice. At times, PWAC members from Victoria made the trek up island to camp in Hope’s orchard, cook dinner together and talk about the writing life.

In later years, ill health curtailed Hope’s activities but not her interest or support. Whenever she heard about a new book I was working on, she’d call to give me leads I might otherwise miss.

Once, she invited Rick and me to stop by after a late afternoon book signing at Blue Heron Books. When we arrived she served a variety of old cheeses, crackers, a choice of $80 bottles of sherry and – ever frugal – leftover Christmas cake from the year before. It was an unusual combination of tastes that, in typical Hope fashion, proved delicious.

In addition to moral support, Hope often purchased my books as gifts for friends and family. Once she asked me to come over and sign one before she mailed it. She greeted Rick and me at the door wearing a turban and colourful Chinese robe.

“The book’s in this room somewhere,” she announced, returning to her phone conversation. Hope organized the material goods in her life by putting them in piles. We found the book under the sixth one.

Hope died a little over a week ago at age 91. Her Comox church service was packed with people from all walks of life including members of the Unitarian Church and the New Democratic Party. There were also writers from as far away as Victoria and Quadra Island.

After the service there was a party at Hope’s house. She would have loved it – a diverse group of people jammed into the small space, eating, drinking the last of her homemade champagne and talking nonstop.

Wherever Hope went, she brought her zest for life and special gift for connecting with people. Although no longer physically in this world, the legacy of her generous spirit lives on in the many lives she touched. I will miss her.