It’s unbelievable how stealthy and quiet cougars are. And how often they can be near humans – on trails or even in urban areas – without anyone noticing.

Visit here to view images and a video clip of a cougar casually strolling the streets of a residential area in southern California.

As well as being silent, cougars can remain still for hours. Scroll down to the third and fourth photos at this site to see the spot where the cougar known as 46m hid on a busy street in the San Francisco Bay area for six hours. Despite hundreds of people walking, biking and driving by, no one knew a cougar was in the bushes until 46m decided to make a run for it.

And it doesn’t only happen in California. In 1992, a four-year old, 60 kilogram cougar was tranquilized and removed from the underground parking garage of the Empress Hotel in downtown Victoria, BC. 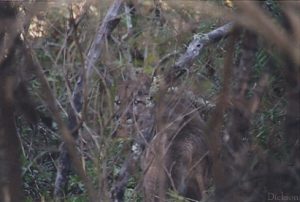 This photo by Jessie Dickson shows just how well a cougar can blend in.