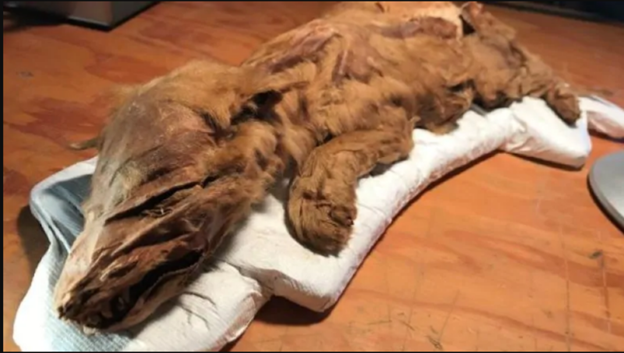 When Neil Loveless found a tiny, fossilized body complete with head, tail, fur and skin thawing in permafrost, he thought it was a dog. Although it was not the precious metal the gold miner was looking for, he stored it in a freezer until a paleontologist could check it out.

The remains, now identified as a Pleistocene gray wolf pup about seven weeks old, were found in the Klondike gold fields of the Canadian Yukon. The female pup lived and died on the ancestral land of the Tr’ondëk Hwëch’in, who have a cultural and spiritual relationship with wolves. The little pup was named Zhùr, the Tr’ondëk Hwëch’in word for wolf.

It’s rare to find fossilized mammals from ancient times, especially one as intact as Zhùr. Scientific studies conducted since the discovery in 2016, reveal that Zhùr ate a diet rich in fish, not the more traditional fare of muskox or caribou. The fish were probably caught in the nearby Klondike River by her mother or other members of the pack.

Zhùr was old enough to venture outside the den, was well nourished, showed no sign of disease and her remains did not appear to have been disturbed by predators or scavengers. Scientists speculate that the young wolf died inside the den when the roof collapsed suddenly.

Other fossilized wolf remains have been found in northern climes such as Siberia but Zhùr’s is the most complete, missing only the eyes. And the approximately 56,000-year-old body provides tantalizing clues to the movement and evolution of wolves in North America.

Over the years, there have been numerous theories regarding the migration of wolves between Europe and North America. Genetic tests show that when alive, Zhùr was closely related to ice age wolves inhabiting Europe but not with wolves found in North America where she lived. Her mummified body provides a vital clue to a significant change in the population dynamic of grey wolves in Canada at the end of the ice age.

Due to its scientific and cultural importance, Zhùr’s body has been accepted by the Canadian Conservation Institute and is now on display in an exhibit at the Beringia Interpretive Centre in Whitehorse. 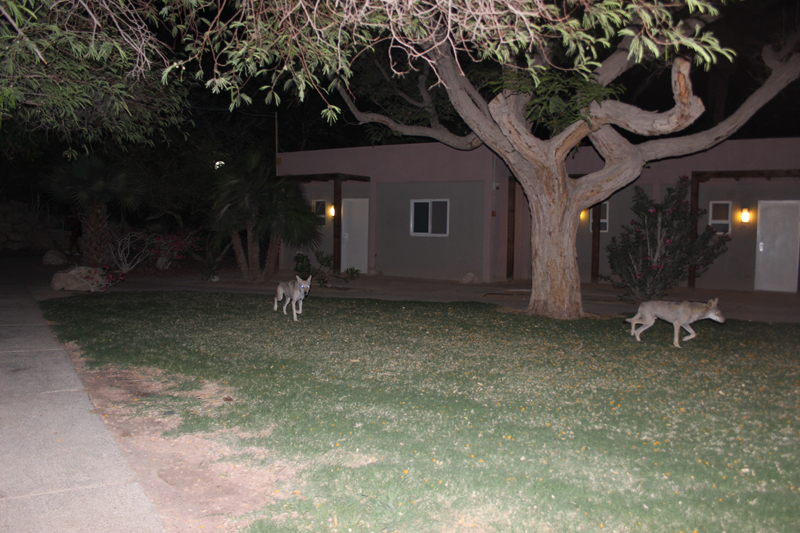 It was 11:00 p.m. and Stanley Russ was only a few steps from Grant and Miranda Moore’s house when a wolf bolted out of the bushes and attacked him. Hearing his screams, the Moores raced outside. The ruckous also alerted the couple next door, Russ’ son Frank and his wife, Sylvia, to the emergency.

Frank got between the wolf and his dad, while the others provided first aid. Despite Frank yelling and throwing whatever he could find, the wolf repeatedly attempted to get to Russ. A neighbour set off her car alarm and the wolf disappeared only to reappear an hour later.

The seventy-two year old Port Edward, BC resident suffered severe bites to one arm and both legs. He received emergency surgery at the Prince Rupert Hospital and was later flown to Vancouver General Hospital for further treatment.

Russ survived the attack, the wolf was killed and, after an intensive investigation, Conservation Officer Service (COS) deemed the May 29, 2020 attack predatory.

Attacks by healthy wolves are extremely rare and usually occur when wolves become habituated to humans and are food conditioned. the Port Edward incident was a classic case.

A large population of feral cats in Port Edward and Prince Rupert resulted in wolves frequenting both communities. The investigation into the attack also revealed a network of trails between Port Edward and a nearby landfill where wolves ate garbage on a regular basis.

As well as sources of food, wolves are also attracted to human belongings and have been known to keep and play with items for up to a year. COS observed a well chewed shoe at the dump that was regularly moved from one spot to another.

Most people do not realize how easy it is for wolves to become comfortable around people. If wolves receive rewards such as garbage, food or human belongings, they will begin to seek out places where people are rather than avoid them.

In many areas, wolf populations are increasing and some wolves are moving through or even occupying space close to humans. It’s up to communities and individuals to make sure there are no attractants to arouse their interest.